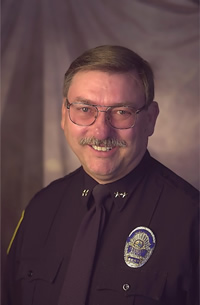 Chief Tom Clemons began his Alaska law enforcement career in 1972 with the Petersburg, Alaska Police Department where he attained the rank of sergeant.  In 1974, Chief Clemons joined the Alaska State Troopers. During his tenure with the Troopers, he was stationed in Anchorage, Paxson (during the pipeline construction years), Juneau, and Palmer, as well as being assigned to the Criminal Investigation Bureau. Chief Clemons retired from the Troopers as a First Sergeant in 1995 and went to work as the Director of Security for the First National Bank of Anchorage. Longing for law enforcement, he became the Chief of Police in Sand Point, Alaska in 1998 and then moved on to Wrangell in 2000. In 2003, Chief Clemons accepted the Chief's position in Seward and has been here ever since. He is the current president of AACOP (Alaska Association of Chiefs of Police), past vice chair for the Alaska Police Standards Council, a member of APOA (Alaska Police Officer's Association, and LEEDA. He also serves on the advisory groups of D.A.R.E. Alaska, AML Law Enforcement Liability Pool, Junior Police Academy, Western States COPS Program, Seaview Community Services, and ALEISS. Chief Clemons currently serves as the chair of the Mountain Pacific Region of the State Association of Chiefs of Police which encompasses 12 western states.

Lt. Nickell hails from the Midwest originally.  After high school he joined the U.S. Army and then later changed forces to the U.S. Air Force. During his years of military service, he traveled most of the world and served his country in support of the war with Iraq and the liberation of Kuwait. In 1999, Lt. Nickell moved to Anchorage and worked for the USDA as a wildlife agent. In 2002, he was hired by the Seward Police Department and worked as the School Resource Officer for Seward's three schools for many years before being promoted to Sergeant in August 2014. He received the Seward Police Department's Life Saving award in 2014. Lt. Nickell was promoted to Lieutenant in August 2018.